Where is The Cod? 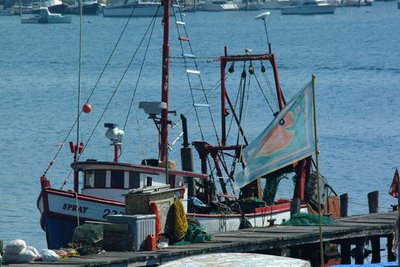 A recent News Scan article in the Scientific American has some disturbing implications for some fisheries practices. The April 2006 issue notes a study that strongly suggests our current cod management plan is dead wrong. What's startling is not so much the conclusions of the study but that the study substantiates what fishermen and hunters have known for a hundred years, namely, that taking the biggest fish (or biggest and strongest animals out of a herd) and leaving the smallest, is actually harmful to stocks.

The study was conducted by The Marine Sciences Research Center at Stony Brook University in New York. Researchers studied six generations of captive Atlantic Silversides. They culled the largest 90% from one group, the smallest 90% from another group, and a random 90% from a third group. What they learned was that killing off the largest fish reduced individual fish sizes by as much as 55%. More importantly, the stunted fish also had many deficiencies, including poor feeding habits, greater susceptibility to predation and less robust spawn.

The conclusion drawn is that negative genetic changes of a given population of animals can be sparked by imposed survival issues. If the largest become prey, it's better to be small. In effect, our cod management plan, as well as the natural propensity of hunter/gatherers to seek out the strongest and largest prey, is decreasing fish stocks and creating smaller individuals, just the opposite of what we're trying to accomplish.

Of course, not all management plans are designed to take the largest fish. e.g. cod has a minimum but no maximum legal limit, whereas the lobster fishery and the striper sport fishery have both. In light of the Stonybrook report, maybe this is why cod are obviously not rebounding and lobsters and stripers seem to be doing well.

I mention this in the wake of the article on cod traps in last month's issue of Working Waterfront. With news like the report out of Stonybrook, and with cod stocks as they are, seems somebody is jumping the gun on the idea of building cod traps. Shouldn't we first have a cod management plan in place that shows signs of actually working?