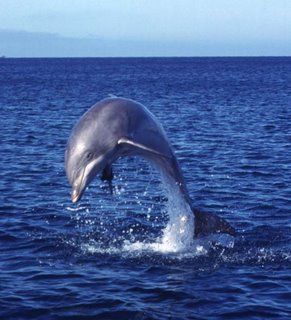 Tonight there's news of 400 dead dolphins washed ashore on the coast of Zanzibar. Stomachs were empty, but preliminary reports indicate starvation was not an issue.

Four hundred dead cetacians is cause for concern. It would be nice to know why. Unfortunately, it's very difficult to figure these things out.

It could be the result of a medical problem unrelated to outside influences, or it could be because of an external effect, powerful military sonar, or some form of pollution.

Sonar interferes with a dolphins ability to echo-locate and navigate.

Sitting in your computer chair you probably don't think too emotionally about this type of news. However, I've been to strandings, and I've seen first hand dolphin drama. I've watched a white sided dolphin desperately push its dead baby ahead of it as the rest of the pod tried to migrate north. Members of the group came back to get the parent dolphin to give up, but it wouldn't give up. All of us on the boat could sense the desperation in this dolphin, the intense pain, the feeling of loss. We could all find some anthropomorphic explanation for what was happening. And we all cried inside. It was sad, break your heart sad. So I can imagine the pain of seeing 400 hundred dolphins flopping to death in the sand.

On the other hand, once they were dead (and this is Africa we're talking about), I can accept and understand why they would become food.

It's important to determine what caused this. If it was sonar from American warships, shame on us.

I've been out fishing in the shadow of US military sonar. I can't help but wonder how many years of my life were taken during that encounter.