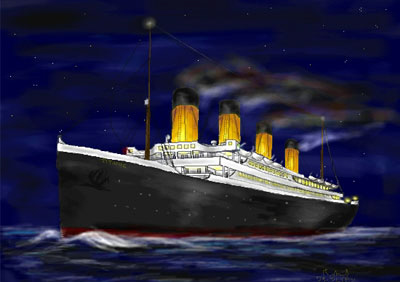 Personally, I think that is a totally unfair charge — unfair to the captain of the Titanic.

After all, he knew where he was going. His lookouts just couldn't see the iceberg spar lurking beneath the surface in their path until it was too late. This administration, and its captain, have been staring the iceberg right in the face for years — it's called dependence on foreign crude oil. It has been totally visible, for miles and miles. And yet the Bush team has just kept sailing right into it, refusing to ask the American people to do anything hard to put America on a different energy course.

Tom really shouldn't make these kinds of statements because he's simply not qualified. If in fact Bush is guilty of neglegence and/or incompetence with respect to an energy policy (the thrust of Tom's column), then the captain of the Titanic is culpable in the tragedy that befel his fateful ship -- and even more so. I would suggest to Tom he read the transcripts of a senate hearing conducted in 1912, the conclusion of which laid blame squarely on the Titanic's captain, and the captain of the California: the first for the wreck and condition of his ship and crew, lack of training, improper staffing and more; the second for ignoring the Titanic's call for help.

If Tom understood Maritime Law, or the responsibiities of a captain aboard a ship, he'd know just how culpable the captain of the Titanic, Edward John Smith, was -- and how wrong the statement he made in his column is.

Is it enough in this world -- or on ship -- to simply know where you're going? Of course not. Do you want to be following somebody who has a destination but no real direction or safe and secure mode of transport? Isn't that a tangential definition of zealotry, or at the very least, naivity?

Isn't this one of the charges Bush critics level at him on a routine basis, that he is zealous and/or naive?

Maybe Bush is guilty of ignoring the iceberg. I really don't know. I don't know the actual condition of the ship we're travelling on. What I do know is Captain Edward Smith was fully culpable in the wreck of the Titanic and the tragedy that followed. And Tom, as a Celebrity Journalist, is guilty of hyperbole, or at the very least, oversimplification.

(Image courtesy of Titanic Nautical Society and Resource Center http://www.titanic-nautical.com/RMS-Titanic.html)
Posted by seabgb at 6:45 AM