Getting Real in Real Estate and Boat Sales 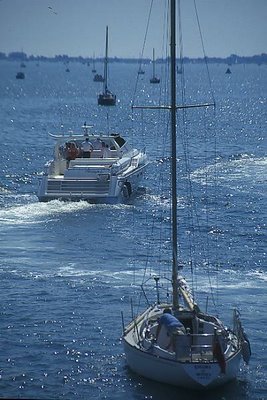 The other day I looked at a used boat for sale in Connecticut, a triple screw high performance race boat listed for what I thought was a damn good price. When I contacted the broker, he told me the thing had come down by almost half. Originally priced new at around half a million dollars, it was set for sale at $300,000, dropped to $175,000 -- and could probably be had for $125,000. If that's not a good deal I don't know what is.

Unfortunately, the thing wasn't meant for me. With triple high performance gas engines at 750 HP apiece, a thirst for high octane fuel not available here on the water, and a hunger for nearly 100 gallons per hour (with gas prices soaring this summer to $4.00/gallon), buying the thing, even at such a great price, would have been equivalent to shooting myself in the head.

Though not really for me, I was interested in this boat because it was such a great deal. Having stuck my toe in the pond, I discovered the chilly reality was that the great majority of asking prices for used boats (and, to a certain extent, real estate) were, and still are, exaggerated and over-inflated. I bet if you did a survey of boats sold in the early nineties, you'd find the difference between asking price and selling price to be about seven to ten percent. If you did a survey of asking price to selling price today you'd find a difference in the neighborhood of twenty to thirty percent, maybe even more.

Am I suggesting the next offer you make on a boat should be half the asking price? Of course not. Worth is still measured by factors such as condition, location, new boat price, and public interest. But what people seem to be doing now is setting a price based solely on what it costs to build a new boat. Is that really just? Is it fair to try to sell a used Bruno Stillman that cost $65,000 in 1975 for $100,000 or more today? My answer is: No freakin' way!

It doesn't matter that the boat has a new engine and maybe a new set of fuel tanks. The only thing that would justify an exaggerated price for a used boat is a complete make-over, including decks, fuel tanks, wiring, hull and deck work, trim, miscellaneous machinery, etc. If it's anything short of a complete make-over you can figure someone is trying to cash in on inflation and today's high cost of building a new boat. Screw that. If you paid $50,000 for a new vessel in the eighties, don't expect to get more than that just because you kept it clean and waxed. These aren't classic cars we're talking about. There's no antique boat market, not really, not in the way you have collectible automobiles and motorcycles.

Brokers, of course, would say I'm all wet. An item is worth what someone will pay for it. They'll say an owner deserves to get what he can for his property. Maybe so. But when you have arbitrarily high values set on boats, and then you have uninformed people paying those exorbitantly high prices, it changes the whole market and brings out the opportunists.

You would think banks and surveyors would temper this trend with a good dose of reality. To a certain degree they do. But you also have lots of people buying boats with cash, and you have lots of bankers and surveyors who think way to much of their own abilities. In other words, they have their own inflated self worth to take into account.

My advice to anyone looking for a used boat or piece of real estate is to do your homework and don't rush into anything. No matter how much you may like something, if you think it's being offered by someone who just wants to ride the inflation wave, walk away. No matter how good a boat you think it is, or how attractive a piece of real estate might seem, there's always another one right around the corner.