Video From the Ashecliffe Job


From top to bottom: 1. Stonington, Maine, shot from the boat as we headed through the harbor toward Merchant's Row; 2. Western Way, headed toward Northeast Harbor, MDI in the b.g.; 3. Key grip and best boy securing the camera crane to the stern deck.

Ashecliffe is the working title for one of Paramount's latest ventures, a Scorcese directed picture based on the Dennis Lehane novel, Shutter Island. Principle shooting wrapped late last summer in Massachusetts but there were some stunt and effects shots needed to complete the story. These were done under and around Otter Cliffs on Mt. Desert Island using a 160 Ton, 70' crane, a second unit team of about 45 professional film people, a cadre of local climbers from Acadia Mountain Guides in Bar Harbor, and my boat, Moonfish, from St. George.

The boat was originally tasked with getting low angle shots of the cliffs in shadow (the story has the main character climbing the cliff on the heels of a hurricane) and also getting shots of a stunt man swimming in the water at the foot of the cliffs. Apparently, after being satisfied with dailies of the climbing, Scorcese decided the swimming shots weren't needed.

We headed up to Northeast Harbor on Tuesday, October 14th and didn't get back home until Saturday the 18th. Most of the time we were on stand-by as the film crew got the more important shots on the cliffs. The Bangor Daily has a story here with a shot of the camera carrier system, known by its trade name, Spidercam, used to get these shots. It's the same system that was used in the Spiderman movies.

We finally got out on Friday for the actual shoot below the cliffs. We were ready by 0500. Camera crew showed up at about 0545. They mounted the camera on the crane, which had already been secured to the boat on Thursday, and we headed out at about 0730. Unfortunately, even though we maneuvered in close to the rocks, working back and forth in 8' to 25' of water, with winds gusting from the north to about 25 knots, the early morning sunshine lit the wall like a Christmas tree, ruining the shadows required for story continuity. At around 0930 Ron Ames turned to me and said something like, "The light's all wrong. It's not going to work." and we headed for the barn.

Unfortunately, both Robert Legato and Ron Ames, Second Unit Director and Visual Effects Producer -- both award winning film makers (Legato got an Oscar for Effects Supervisor on Cameron's Titanic) -- had to catch a plane. If we'd had more time, we might have gotten their much-needed shadows later in the day. In fact, only a day or so later, the weather turned to wind and rain and heavy cloud cover. Oh well. . . . 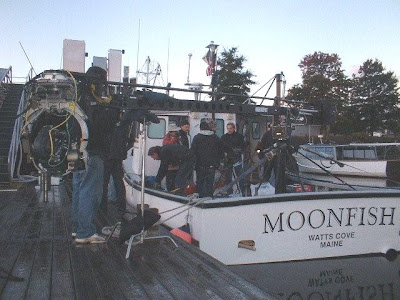 This photo was taken by Moonfish crewman DL Maxcy on Friday, October 17th just before we got underway for a shoot off Mt. Desert Island's Otter Cliffs. Camera Crane is an Enlouva with a 15' extension. I had to lighten the image a little on account of the fact that the shot was taken in low light at about 6:00 AM. That's Ron Ames in the hat and Robert Legato to his left. I believe Bill Summers is the one with his back to the camera. The other people in the photo are all members of the film's Second Unit Team and/or Camera Dept.