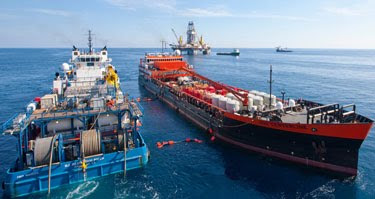 © BP p.l.c.
BP successfully killed its errant well yesterday after pumping drilling mud and then cement into the well bore. If the bore and well head structure filled completely it's a good bit there will be no more oil seeping into the Gulf from the Macondo reservoir. But, as Admiral Thad Allen suggested in his press briefing yesterday, it's still too early to "celebrate." To ensure complete success, mud and cement have to be pumped into the reservoir from one or both of the relief wells.

I'll probably be one of the first and only ones to say it, but I think BP stood up to the plate and did what had to be done to control and correct this terrible accident. They could have done what Exxon did during (and following) the Valdez spill but instead took a higher road. I think they should be commended and not lambasted by the media or the public on this score. As far as the circumventing of safety rules and regulations, well, that's another story. Even there, though, they didn't do anything others weren't also doing.

I wonder how long it will be before BP or another company suggests a return run on the Macondo oil field. There's still a lot of oil down there.

Meanwhile, there's a debate going on as to the true environmental impact of the disaster. Is there or isn't there a continuing oil pollution and chemical dispersant problem in the Gulf?

Posted by seabgb at 5:46 AM No comments: