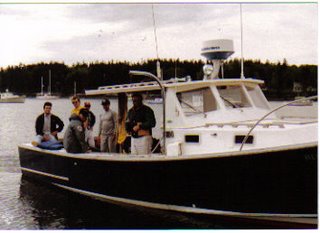 This group of six divers are returning from the wrecks of the schooners Zeeman and Alexander. Guy sitting on the starboard quarter picked up a nice porthole off the former. Big bronze porthole with octagonal backing plate and all through bolts.

I miss this little boat, but you can see she wasn't exactly up to the task. With six divers and 18 tanks and all related scuba gear, she rode low in the water. Scuppers were half under. A boat with wet exhaust can have some problems with this type of loading. The exhaust outlet gets swamped and engine back pressure increases. Obviously, boats with keel pipes and dry stacks don't have this potential problem.

The boat is a 1982 Sisu originally designed by Royal Lowell. She was a great boat, but built to standards typical of the era. In other words, she had a balsa cored hull, washboards and foredeck, and a glass-over-plywood main deck. Bulkheads were glassed on one side only. And every hull penetration was made through a hole drilled directly into the core. Today, builders know they have to reinforce the hole with solid glass before adding a through hull fitting or a deck fitting. They also know the deck and bilge need ventilation just like the roof of your house. Condesnation is a killer.

When buying a fiberglass boat older than twenty years, these are things you should look for. Find out what the deck is made of. If it's FRP covered plywood, see if it's covered on both sides? If not, and you have a boat with very little if any ventilation, you should suspect a punky deck and punky bulkheads. Look for signs of mold under the washboards.

Wire, of course, is only good for about twenty years. If the boat your inspecting has not been rewired, count on doing it, especially the wire that runs through the bilge or between cabinets and hull sides, anyplace where there's an accumulation of moisture from condensation and/or topside leaks.

Boats that spend a lot of time freighted with cargo or passengers, like the one above, might have similarly suspect areas of rot in the transom, particularly around scuppers, wet exhaust outlets, and structural supports for swim or dive platforms.

And don't forget to pull a through hull and see if indeed the core has been compromised.

It's funny, one of the first questions many boat buyers ask is about the engine. But look at it this way: Even though engines are typically the most expensive single components of a boat, it so happens they're the easiest thing to fix or replace. Pop it out. Rebuild it, put it back. Or take the old one out and pop in a new one. Depending on engine access and what has to be done to get to the thing, it's usually a lot harder and more expensive to rebuild the boat itself, i.e. hull, decks, and bulkheads. For example, the cost of re-wiring a luxury sailboat will typically exceed the cost of replacing its propulsion engine.

So the next time you think a good looking, clean boat of over twenty years is a good buy, think again. Take a closer look at the way it was built. If they cut corners at the outset, chances are you'll be paying plenty to put those corners back