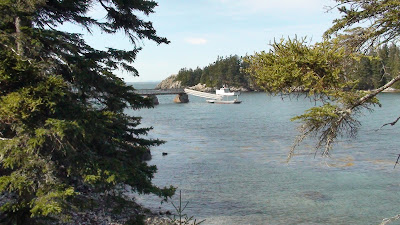 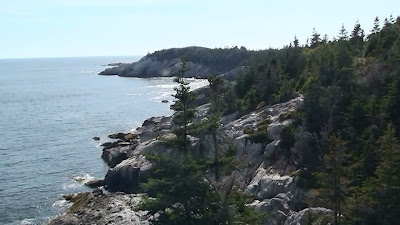 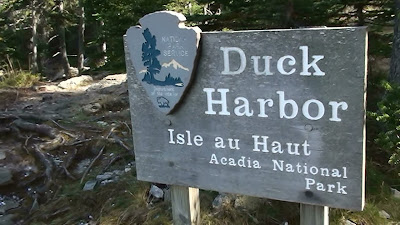 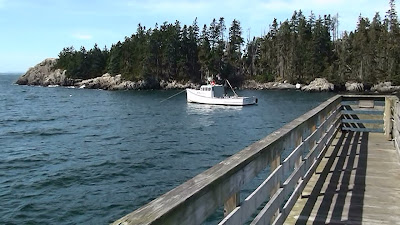 We took a trip to Duck Harbor in Isle Au Haut yesterday and hiked around the the section of the island designated as part of Acadia National Park. There are 18 miles of trails carved in a rustic, idyllic setting. Pristine, root strewn woods trails, polished, granite cliffs and smooth stone beaches highlight the area. Our hike took us from the Duck Harbor landing to the cliffs on the south side of the island all the way around the western end and back to our point of origin, a distance of 3.3 miles. I was sore when I got back.

There is a ferry or mail boat that will take you to Duck Harbor in the summer and early fall. I took Moonfish out. Vefore leaving, I tried to get some info on what I'd find at Duck Harbor for moorings or an anchorage. A Google maps search showed a dock and wharf but I had no idea if it was even good for a landing at all tides. Hence, we left Tenants Harbor with a "final destination unknown" mind-set.

For the record, there are no moorings, and although Duck Harbor has fairly good holding bottom for an experienced mariner who brings with him or her a damn good anchor and rode, it's exposed to the west and southwest. Even a moderate breeze from these directions will kick up a nasty chop inside the harbor. This is not a place to lay on a lunch hook, unless you plan to stay with the boat.

The landing itself is set-up to handle the 40-plus foot mail boat that arrives twice a day, so it is substantial enough. But don't leave your boat here. Common courtesy requires swiftness when loading and unloading.

The other alternative is to go to the town landing located in the Isle Au Haut Thoroughfare and sheltered by Kimball Island. From here, however, it's about a five mile hike to the park.

Last month or thereabouts USA Today reported that Bill Gates and climate scientist Ken Caldeira filed an application for a patent on a Hurricane Management System consisting of giant barges and turbines that would interchange warm surface water for cold sub-surface water. The barges, placed strategically in the path of hurricanes, would be used to remove a hurricane's primary source of energy.

Whenever I read or hear about Man's grandiose plans for controlling the planet I get this feeling of dread in the pit of my stomach and the sense that life as we know it will soon come to an end. Who are we to think we can correct nature? Who are we to think hurricanes, tornadoes, droughts, floods, tsunamis, lightening storms, blizzards, etc., are something other than our planet's attempt at self-preservation and self-correction?

Please, someone give me an example, just one, of an environmental, atmospheric or ecological engineering, regulatory or management plan that has worked successfully without consequence. Just one.

So we reduce one hurricane's strength. Maybe two. What happens next? A hurricane so big and powerful we have to come up with a new rating system just to quantify it.

Instead of trying to live in harmony with Earth's natural ways, instead of working and living within the boundaries of common sense, we insist on going head-to head with nature and our planet's tendency to stabilize itself.

When are we going to get it? We are but a pimple on the ass of the universe. We are less than nothing. And yet we continue to think we can buy our way to a Gene Roddenberry future.

That's right. Mine more ore from the Earth. Smelt more steel. Weld more barges and machine more engines and turbines. Build humongous vessels and have giant pumps suck massive amounts of seawater and fish and God knows what from the depths of the ocean to replace warm water on the surface. As if it is something that can be done without consequence. Right.... Good plan. Why not just figure out a way to change the tilt and orientation of the Earth in its orbit? Better yet, why not change the orbit of the Earth itself?

And I thought Bill Gates was trying to destroy the planet with Vista.