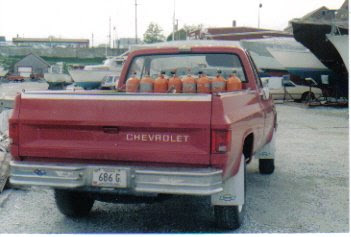 Two divers that had surfaced 200 yards away from their chartered dive boat and had gotten lost on the Great Barrier Reef were found by a helicopter rescue team after spending twenty hours at sea together. The two are credited for making the smart choices necessary for their survival. They stuck together, remained calm and chose not to try to swim to shore.

Time goes by pretty quickly when you suddenly say to yourself: "Hold on. We're missing two." Everybody aboard starts to search the area with binoculars. There's 15 minutes right there. Add this to the extra 10 or 15 minutes you might give to stragglers and the 45 minutes to an hour they were in the water for their dive, and you have a response time of only about a half hour to 45 minutes.

I can tell you from personal experience as a dive boat operator there's a hollow pain you feel in your chest the very second you realize a diver is missing. One rule of thumb is to contact authorities and report the missing diver immediately. The reason for this is that you'll never lose precious time calling off a search or a response -- but if you wait, that's time you never get back. In practice, though, as a dive boat operator, you know there are divers who don't follow the boat's or the captain's instructions. These are the guys who make it worse for everyone. When we say back at the boat in one hour, we freakin' mean it!

Personally, I make the call immediately. If you don't show when I tell you, and I can't see your bubbles or your buoy, I'm calling the Coast Guard and telling them I have a diver who has not reported topside at the appointed time. We haven't scrambled a MAYDAY yet but at least we're ready to roll and the process has been initiated. As a boat captain who's responsible for everyone aboard, you have to err on the side of caution.

The other interesting thing abut this story is that the two who went missing were really not that far away. Two hundred yards, two football fields -- all I can say is that there must have been a sea running with some white caps because two brightly colored BCs and snorkels would show up at 200 yards in calm or relatively calm seas.

For the record, it's very common for divers to come up late to the boat or come up far away from the boat. For captains, it's frustrating and stressful and we hate it.

It's very unusual, though, for dive boat operators to leave divers in the water and sail back to port without them. Unusual, but it has happened. The movie Open Water, based on the true story of two divers who were left behind on a Caribbean dive charter, is about just that sort of thing. Obviously, the movie spends a lot of time in "speculation mode" but it's still worth a watch if you don't mind movies with depressing endings.

At least this story from Australia ended happily.