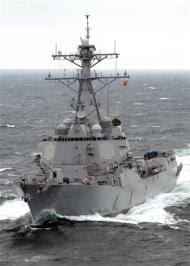 The Navy ship above provided assistance and medical help to the North Korean hostages I wrote about in the previous post. Apparently, the hostages took control of their vessel after overwhelming the hijackers during a U.S. helicopter flyover and radio warning. One pirate was killed and three were wounded. Three hostages were also wounded. This is the third time a ship's compliment got the better of their hijackers. The AP has a pretty detailed accounting of what happened here. 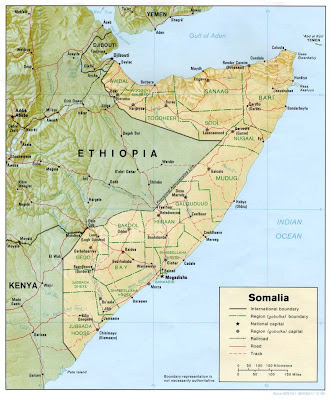 I think it's very cool that a U.S. warship came to the aid of a North Korean merchantman. I'm also betting there's considerably more to this story, for instance, was the Navy shadowing the North Koreans or was it on the lookout for pirates or both?

This past Sunday, the Navy blew up three alleged pirate skiffs with all aboard. Good riddance.

Perhaps honest, law abiding Somali fishermen and other mariners will come to realize it might be better for them to kill their own pirates than wait for the U.S. or some other navy to do it. You don't always know who's who when you're looking at them down a gun sight. If I were a fisherman in the Indian Ocean, and I was being approached by a strange vessel that kept on coming, I would be inclined to shoot first and ask questions later.

Come to think of it, I'd probably feel the same way in the Florida Straights. Have you been following the Joe Cool story?

Unfortunately, the crew of the Joe Cool were duped by a couple of vicious con men who didn't give them much of a chance.