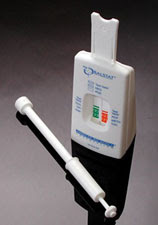 A company called American Bio Medica, trading on the NASDAQ as ABMC, has come up with a an oral fluid drug test that they say provides much faster results than those available by current drug test methods. At present, urine samples are collected and sent to a lab, results can take days if not weeks. According to the company, the OralStat, as its called, can deliver results in 16 minutes and is much more sensitive to marijuana than other testing kits.

However, before you go investing in the company, take a minute to remember the hoopla that started when the government first introduced drug testing on a national level. Some people, and even some human rights groups, tried to prove drug testing was an invasion of privacy. They lost their fight but managed to make some changes in drug testing policy.

Even when their is high probability that the person being tested is a habitual drug user, or under the influence of drugs or alcohol, it is essential for law enforcement or other people of authority to adhere strictly to procedure in order to maintain the highest degree of a given test's lawfulness and integrity. What good is proving a person committed a crime or was involved in a costly or fatal accident if the proof is worthless in a court of law?

Let's see what happens when the defense attorneys start challenging the new test and the people in the field who administer it. Maybe it will be as legally rock solid as the result obtained from a professional laboratory, and maybe it won't.