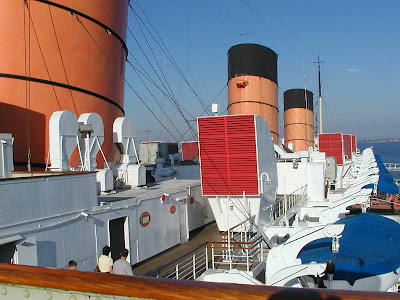 Here's another story illustrating the need for restraint on the part of environmental activists. Holland America started a pilot program whereby they installed emission scrubbers on the stacks of one their their cruise ships. The scrubber uses seawater pumped through the stack to reduce sulfur and other contaminants from the engine's exhaust. The seawater is then pumped back overboard. But recent studies have shown the sulfuric acid added to the ocean water actually increases the release of carbon dioxide, which further exacerbates the greenhouse effect. Much like the story below, it's a case where the best intentions have led to the worst consequences.

Don't misunderstand me, I'm a staunch conservationist. I believe in protecting the environment. And I'm active on behalf of many environmental causes. But when activists or lobbyists promote change that does more harm than good, it's time for said activists to find another line of work.

PS. Please check out the comment by Chris Leigh-Jones, of MD Krystallon Ltd, who argues on behalf of scrubbers. In a nutshell, he says that although it's true the sulfuric acid effluent from scrubbers releases CO2 from seawater, the overall release of CO2 from the alternate fuel supply side (either from the creation of low sulfur fuel or the creation of low sulfur distillate fuel), at present the only other two emission control methods, is much worse. I don't doubt this claim for a second, but I wonder why, if this is the case, we in the U.S. have switched to lower sulfur fuels?
Posted by seabgb at 8:00 AM

You are correct that the reaction of cidic exhaust gasses with sea water releases CO2. this is however only part of the story. there are two alternatives proposed to clean up shipping emissions other than the use of scrubbers.

The shipping industry uses about 350MT of bunker fuel a year. there is not enough low sulphur crude around to satisfy this demand so the fuel will have to be processed.

Removing sulphur requires hydrogen which in turn has to be manufactured. this required energy aka CO2. More energy is wasted in this process than the corresponding release of CO2 in scrubbers.

Using distillates is very much worse. the cost about 2 times the price of residucla fuel for a reason. That reason is that it takes a great deal of energy to convert high density viscous residual fuel in to low sulphur low density distillates. In fact the International Energy Agency quote the net release of manufacturing 350MT of extra distillates to be equivalent to 150MT of CO2.

Scrubbing also removes particulates, expecially those very small ones that cause so many health problems.