South Korean Warship Struck by Mine? (Updated May 19) 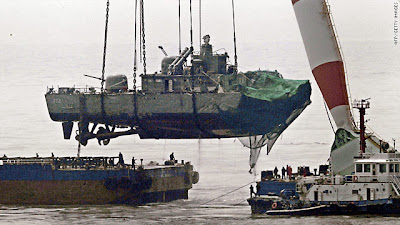 Part of the South Korean ship that blew up and sank in waters bordering South and North Korea has been salvaged. South Korean Investigators are now pointing to an external explosion. The CNN World article is here.

My problem with the article is that it suggests the potential for nuclear engagement between the two countries instead of providing details of the salvage or the investigation. Apparently, CNN prefers to trade in tension, strife, fear and anxiety than straight news. Ooh, what can we expect South Korea to do? They have six nukes.

I doubt the explosion and sinking were caused by a North Korean torpedo or missile. And I doubt South Korean authorities think otherwise. But CNN has to make it sound like the beginning of a war or how ever would they compete with the all-action F/X Channel and their reruns of The A-Team?

[Today, May 19, the Wall Street Journal reports that S. Korea will officially blame N. Korea for sinking the vessel with a torpedo fired from a submarine.]

It's dangerous sailing around in war-ravaged waters. There are all kinds of unexploded ordnance. It happens. It's unfortunate. Soldiers die on routine patrols. They die watching the gates. They die when they're not supposed to. Let's not turn this thing into the beginning of WWIII or make idiotic comparisons to what happened with the U.S. spy ship Pueblo.

Shame on you CNN.