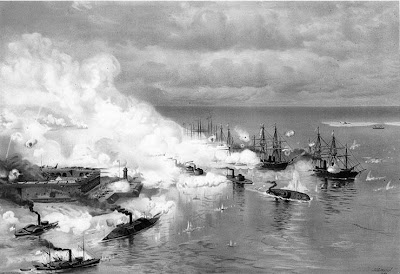 Reproduction of an 1864 pen & ink drawing by George Waterman, Courtesy AmericanCivilWar.Com
Hurricane Ike has further uncovered a shipwreck of wood and iron fittngs on the beach at Fort Morgan, LA. Some say it's the Monticello, a schooner that tried to run the Union blockade of Fort Morgan, which was held by the Confederates.

On the other hand, The Army Corp of Engineers says the wreck is that of a 20th century schooner named, The Rachel.

Archaeologists will have to sort it out with a more detailed examination.

For a photo of the wreck and more info, do a search for Monticello AP.