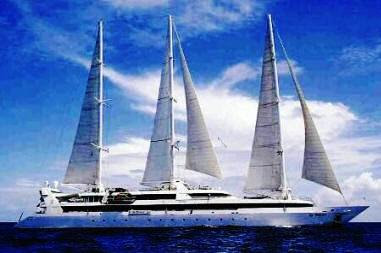 This time they went after luxury. The Le Ponant, a French flagged vessel of 1443 GT ITC, is described as follows by Worldwide Travel and Cruise Associates, Inc.:

The 88 meter sailing yacht is a modern vessel capable of making fast passages under sail. The on board service is of a high standard with an excellent European crew and French chefs. Up to 64 passengers can be accommodated in the 32 spacious stateroom. All staterooms are air-conditioned, with en-suite bathrooms, comfortable beds which can be converted from single to double as required. There is satellite telephone, fax and telex communication on-board. You can enjoy dinner in the classic dining room in an atmospheric setting or dine on deck under the stars.

There were no passengers aboard at the time of the attack but it has been reported the pirates seized 30 crew members.

The vessel was in transit through the Indian Ocean when it was attacked off the coast of Somalia. This area has been know as a hot spot for pirates for many years. U.S. warships and others have engaged and killed pirates in this vicinity before.

I'm wondering how the French will deal with this situation. I have a sneaking suspicion that under the leadership of President Sarkozy, Somali pirates can expect considerably more backbone and fortitude than was shown by France in all the years the country was presided over by the Jacque "Milquetoast" Chirac.