Media Blasts Cota for SF Oil Spill . . . What Does It Mean For The Rest Of Us? 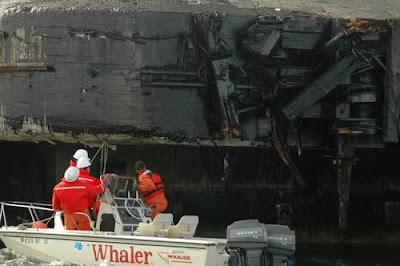 CALTRANS Assesses Bridge Damage, San Francisco -- A team of Transportation Engineers from the California Department of Transportation began assessing the damage to the San Francisco Bay Bridge Nov. 9, 2007. The bridge was damaged after the 900-foot container ship Cosco Busan bumped the bridge during dense fog Nov. 7, 2007, spilling nearly 58,000 gallons of bunker fuel into the Bay.(U.S. Coast Guard photo by Petty Officer 3rd Class Melissa Hauck.)
Capt. John Cota, the San Fransisco Bay pilot who is being held responsible for clipping the Bay bridge with the container ship Cosco Busan, had an OUI on his record from 1999 and was on various medications, including drugs for sleep apnea, depression and anxiety disorders.

What the media is asking and wondering is why the U.S.C.G. issued him a pilots license given his condition and what they knew to be true from from a recent physical, namely, that he suffered from alcoholism and depression.

Each of us in the maritime trade know what it's like to go through a physical every five years for our license renewal. It's not a big deal. During my last physical, for the hearing part of the test, the medical person giving me the exam stood behind me and whispered: "Can you hear me now?" They want you to pass, as they should. It's a hard thing to do to take away someone's livelihood.

What's more, the system, in fact this very country, is geared to the idea of redemption and rehabilitation. As a former owner of a U.S.C.G Certified passenger boat and a former employer of maritime workers I can tell you that if an employee fails a drug or alcohol test they can't just be fired or reassigned. It is your responsibility to relieve them of duty and then provide them with a means of rehabilitation, i.e. counseling, drug treatment, etc. Essentially, you have to provide for their care and treatment.

The media and our knee-jerk politicians can't have it both ways. They can't do everything in their power to save somebody their job through treatment, rehab and understanding and then slow roast him over the coals when the their efforts fail to achieve the desired results.

Let's face it, this guy should not have been a pilot given his medical condition. He should have been retrained and/or reassigned. Treatment and rehab are his responsibility and his alone, not his employer's, his company's or society's. Meanwhile, who else is really to blame for this accident but the people who brought us this stupid nationalized mentality of zero tolerance on illicit drugs and 100% tolerance on prescribed meds, drug treatment and rehabilitation. We're putting way to much faith in the pharmaceutical industry and our medical and psychiatric professions.

I can almost guarantee what will come out of this for the rest of us mariners who haven't been diagnosed with depression, sleep apnea and/or anxiety. Even though we're not on prescription drugs, and even though we have not been diagnosed with some emotional or mental abnormality, we will have to conform to new and more stringent standards of medical testing. These new standards will add three or four times to the costs of a physical. We're all ready paying quadruple for new licenses and security IDs.

The other sad part is this: If you have some vision difficulties, hearing loss, knee problems. If you complain of stomach pain, or worse, if you have been diagnosed with a non-debilitating physical abnormality of some kind, you might end up loosing your job -- and all because a bunch of congressmen need to show their constituency that they're on the ball and working hard to make sure this sort of thing never happens again.