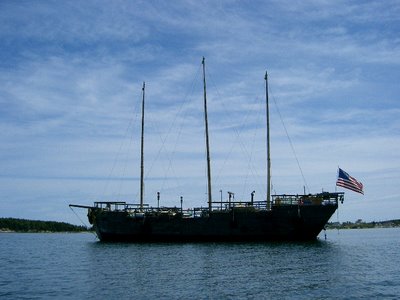 This is the Raw Faith, a back yard- built replica of an old sailing ship. As a professional mariner and a student of the sea, I would normally tell you what kind of ship this is. Unfortunately, in this case, any resemblance to an actual ship -- a vessel designed and constructed according to acceptable nautical methodology -- is in name only. It's supposed to be an English Race Galleon. In fact, it's an abomination and a danger to one and all.

The captain and owner of this vessel had a grand plan to create an ocean experience for people in wheelchairs. Unfortunately, this person had no experience in shipbuilding or seafaring. What he had was a zealous drive to combine a religious pilgrimage of the past with a non-profit enterprise to help people with disabilities.

It's an admirable and worthy thing to want to help people, but as the saying goes: Sometimes the best intentions. . . .

At what point do you tell someone to relinquish their dream? At what point do you interfere with American entrepreneurship? I would suggest, in this case, the tipping point has come, literally. Twice now the Raw Faith has tried to leave Maine waters. Twice it has failed in its mission, both times placing its crew and passengers, other mariners, and the crews of those vessels who came to its rescue, at extreme risk. Enough is enough. Dismasted, unable to make headway, taking on water, in uncomfortable but not severe conditions, make this venture a frivolous and hazardous affair of the heart.

Fitzcarraldo (Brian Sweeney Fitzgerald) also had a dream. His dream was to bring opera to the people of Iquito, Peru, 3000 miles up the Amazon River and 106 meters above sea level.

Perhaps some dreams are just to lofty. Or maybe the problem exists with the dreamers themselves.


Movie poster courtesy of wernerherzog.com. Please see Copyright Notice for fair use statement.
Posted by seabgb at 5:18 AM