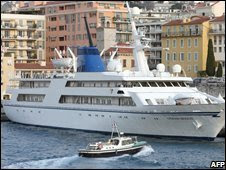 Have you ever had an itch to buy a luxury super yacht with its own secret escape passage to a hidden submarine? If the answer is yes, then I've got a deal for you. The Iraqi government is selling Saddam Hussein's old boat, the Ocean Breeze. Never mind the ironic name, or the possibility the bilge might contain human bones. If money is no object, and the idea of cruising the seven seas in the former dictator's toy tickles your fancy, then all you have to do is cough up $35 to $70 million. The AP and BBC are running the story and quoting a price tag of $35 million, but I think that's understating its value. Sure, it might need some work, but think of the advantages to someone like Amadhenajad, or as we like to call him here, Imanutjob. A ruthless, cutthroat, racist, genocidal maniac of a leader can save themselves a lot of work accumulating bad karma by buying this boat and riding the perverted tail feather of a man like Hussein. Anyway, if you're interested, call 1-800-RAQNROL
Posted by seabgb at 10:34 AM