You might notice how the forecast for a particular weather event will change or fluctuate in severity over the course of a forecast period. This isn't so unusual when you consider how local weather events are predicted. It's true, the forecasters have a great deal of scientific muscle at their disposal in the form of complex computer models, but the vagaries and uncertainties will never be completely eliminated. After all, it doesn't take much for a low pressure area moving up the coast to swing a few degrees one way or the other, turning an intended gale into a pussycat or a small craft advisory into a major blow.

One way to protect or prepare yourself is to never assume a given forecast is static. All too often, people get caught making assumptions. But don't blame the weatherman. Don't expect small craft advisory conditions with a major depression working up the coast just because the forecast calls for winds of 15 to 25 knots. As the saying goes, "Hope for the best, Plan for the Worst."

For example, nothing helps the mariner more than timely information. Keep abreast of changes in the forecast. When you see or hear NOAA report a gale at 23:00, and then see or hear the same report downgraded to a small craft advisory by 07:00, don't be so sure. If the low hasn't yet passed your latitude, anything is possible. In fact, sometimes a forecast will go back and forth for hours, especially when the weather system in question is a tropical or sub-tropical low. 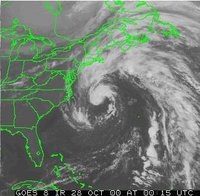 So, beware the forecast. Don't blame the weatherman. Stay tuned to NOAA weather radio. And never assume your forecaster has a lock on accuracy.